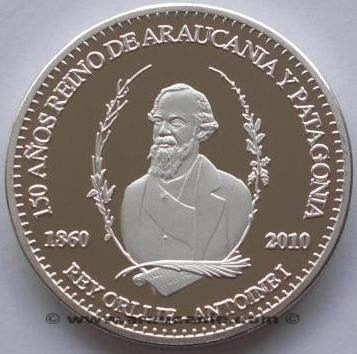 Born May 12, 1825 at Chourgnac d'Ans, France, Orelie-Antoine de Tounens was one of eight children in the land-owning family.  He studied law and began a legal practice in Perigueux, France.  In August 1858, he emigrated to South America and spent two years in the Republic of Chile.

​In 1860, Orelie-Antoine entered Araucania and soon came under the protection of the Mapuche toki Manil.  With Manil, Orelie-Antoine toured Mapuche-held lands, met with local tokis, and argued for the formation of a Western-style constitutional monarchy to once and for all time secure the sovereignty and independence of Mapuche-controlled Araucania.
On November 17, 1860, at a conference held in Araucania, the Kingdom of Araucania was proclaimed and Orelie-Antoine was named its first king.  Three days later, after consulting with a Mapuche cacique from Patagonia, that territory was added to the realm.

On January 5, 1862, King Orelie-Antoine was captured by Chilean troops inside Araucanian territory.  On January 10, 1862, the king was brought before a judge in Los Angeles, Republic of Chile.  After languishing in jail for many months, the king was declared by the court to be insane and was put aboard a French ship and returned to France.

In 1869, Orelie-Antoine returned to his territories, sailing aboard the Oneida to Buenos Aires, Republic of Argentina, and thence south into Patagonia aboard a French naval vessel.  Under the protection of Araucanian caciques, was brought across the Andes mountains into Araucania.  The Chilean government responded to the return of the king to Araucania by placing a price upon his head.  In 1871, Orelie-Antoine decided to again returned to France to raise money for the work of the kingdom.

He returned to the Atlantic coast by traversing both Araucania and Patagonia under the protection of Mapuche caciques.  In Montevideo, Uruguay, the king boarded a ship to France.

In 1874, the king returned to his kingdom with arms and coins, but was arrested on July 17, 1874, shortly after he debarked in Bahia Blanca, Argentina.  After a detention of three months, the king again returned to France to regroup.

The king's fourth and final return to the Kingdom of Araucania and Patagonia took place in 1876, with the king landing at Montevideo, Uruguay.  Not long after he arrived in Patagonia, the king became ill and was taken to Buenos Aires, Argentina in October.  On November 7, the king underwent life-saving surgery and returned to France aboard the Parana, arriving in Bordeaux on January 26, 1877.  He returned to his family and lived out his final months in Tourtoirac, France, where he died on September 17, 1878.
​
Orelie-Antoine never married and had no children.  In his will, he named Achille Laviarde as his successor.  He is buried in the Tourtoirac cemetery.