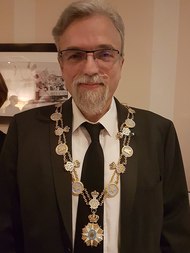 On March 24, 2018, the Regency Council of the Kingdom met in Paris and elected Frédéric Nicolas Jacques Rodriguez-Luz to be the successor of Antoine IV and the new Head of he Royal House of Araucania.   After taking his oath of office before a large crowd, including a special Mapuche delegation from Porto Montt, he began his reign as the sovereign of Araucania and Patagonia by taking the style Prince Frédéric I.

His first official act was to award the Mapuche Warrior Medal to Teresa Paillahueque Miranda.

Born on March 9, 1964 in Toulouse, France, Frédéric studied modern literature.  He is a widower and has two children, Diane and Henry.  In civil life, he uses the simpler name Frédéric Luz.  He is a heraldist by profession.

​Here's a link to his wikipedia page: Frédéric Luz.