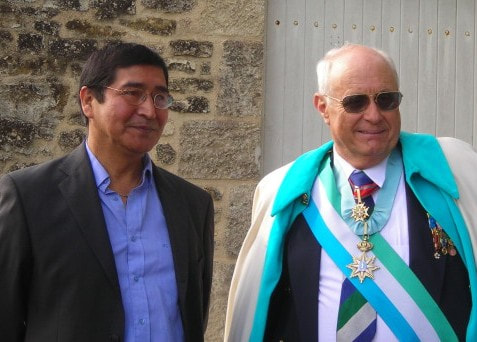 The Prince entered the service of the Royal House of Aracuania and Patagonia in 1972.  Later, he was given the title Duke of San Pedro de Hueyusco by Prince Philippe I.

Born on March 26, 1942, he reigned under the title Prince Antoine IV.  He was married and has two sons.  A military veteran, he saw service in Algeria.  Professionally, the Prince had a successful career in social work, specializing in the care of children and mentally-handicapped adults.  He held a doctorate degree in the history of civilization.

Photo by Viscount Franz de Malimensu.  H.E. Reynaldo Mariqueo, Count of Lul-lul Mawidha and charge d'affairs for international relations on the left with H. E. Jean-Michel Parasiliti di Para, Duke of San Pedro de Hueyusco and President of the Council of the Kingdom.